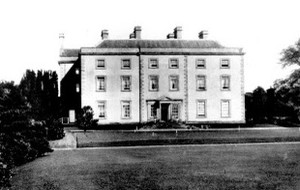 Why don’t you take 5 minutes to read this beautiful piece written by Lord Belmont, which tells of his fond memories of Castle Archdale!

‘We spent many happy occasions at Castle Archdale Country Park on the shores of lower Lough Erne in County Fermanagh.

My first visit must have been in the late 1960s, and we kept returning during the seventies and eighties. I should begin by saying that Castle Archdale was the seat of the Archdale family, of whom the Archdale Baronets were a branch. In 1862, Castle Archdale was one of the largest estates in County Fermanagh, comprising 27,410 acres. I think some members of the family still lived on the estate till the sixties, before selling it to the Northern Ireland Government for use as a country park and caravan site.

Interestingly, Castle Archdale once had its own private railway halt, near the main entrance to the demesne, between Enniskillen and Irvinestown. The manor house, located on a hill above the lough, was a noble edifice built in 1773 to replace the old castle some distance away. It had three storeys over a basement; a six–bay entrance front; a doorway with Ionic pilasters; and a three–bay side elevation. The manor house was requisitioned by the Royal Air Force during the 2nd World War.

It was known as RAF Castle Archdale from 1941–1957; ruinous by 1959; and finally demolished in 1970.I imagine the Archdales never returned to their old home after it had been requisitioned by the RAF. Here is a most interesting link with photographs of it as a RAF Station. Incidentally, the Northern Ireland department of Agriculture forestry service had a habit of demolishing country houses on estates they acquired, viz. Riversdale, Castle Archdale, Belvoir and Tollymore, to name but a few. The foundations of the manor house remain; they’ve been tidied up to form part of a feature along with the courtyard and stable yard behind.

I vaguely remember seeing what remained of the old house in the late sixties, when I was a boy: There were two large, green water–tanks elevated above the house which could be seen miles away on the lough – a good land–mark to aim for. Staying at Castle Archdale was a wonderful experience for me. Elements of the flying–boat base still remained: concrete platforms, steel shackles and a refueling jetty complete with an old fuel pump! We used to keep our boat there, motoring out to the islands of Lough Erne on fine, sunny days when the lough was tranquil and peaceful. We often visited White Island or Crevinishaughy Island, which I loved with its old derelict lodge and cottage. Lusty Beg Island, where my father and I met Charles FitzGerald, the columnist, and watched him having a spat with somebody about the speed of their boat on the lough, broadening the argument out to a frank exchange of views about local politics!

He  had invited us on to his boat for a drink earlier. The swell from the arrival of the other boat doubtless caused the argument, along with the subsequent spillage of red wine! At that time the prominent Northern Ireland politician Bill Craig owned Gaffer Island and his boat was frequently tied up at the island’s jetty. Either the Union Jack or the Red Ensign flew from the jetty when he was present. The Craigs had a static caravan on the little island and there were rumours that he had been warned not to build a permanent home there.

I cannot validate the truth of this claim; though perhaps the truth was more banal and he couldn’t get planning permission. We often noticed Bill Craig seated in the lounge bar of the old Manor House hotel, quietly reading his newspaper with a drink and minding his own business. His boat was called Gaffer Goose or Gaffer Duck. We had a sort of circuit of hotels and restaurants which we frequented in those days: the Manor House Hotel at Killadeas; the Lough Erne Hotel in Kesh; the Encore Steakhouse, Ballinamallard; and the Hollander in Irvinestown. The Manor House Hotel was a small, country house hotel then. We probably went there more often because it was quite close to Castle Archdale. The proprietor was, I think, Raymond Noble and I have memories of him wearing a naval sweater and taking us down to the games–room in the basement for a spot of snooker. He was follicly challenged! Needless to say, I preferred the hotel in its original state compared to now. There was one very spacious lounge bar, another large dining–room and a residents’ lounge.

These were the main rooms on the ground floor. The Hollander in Irvinestown was another firm favourite: It had a cosy ambiance and the walls were adorned with old black–and–white pictures of flying boats on Lough Erne. The food was good there, too, a speciality being duck served in Chef’s own inimitable way. Jim Holland ran the bar; his son was the chef; and his wife managed the kitchen. There was an establishment in the nearest village, Lisnarick, called the Golden Pheasant I think; for some reason we didn’t visit it often. I seem to remember reading the Newsletter newspaper in the car with my father at Lisnarick; and there was an article about the then Lord Grosvenor being involved in a light plane incident while giving his friend, LORD BELMORE, a lift.

The 6TH DUKE OF WESTMINSTER was then styled Gerald, Earl Grosvenor. His parents, the 5th Duke and Duchess, lived at Ely Lodge Estate. He’d have used the local airfield, St Angelo’s, near Enniskillen. In Victorian times the Marquesses of Ely were the largest landowners in County Fermanagh; and the Archdales were not far behind them. Of course we have revisited Castle Archdale on innumerable occasions since then. I last stayed there, up at the courtyard, in about 2004 for a few days. I invariably pay Castle Archdale a visit every time I’m in the county.’

We are open from the St Patrick’s Day Weekend until Halloween Weekend for touring and camping stays.
New for Winter 2022 – Opening Aire de Service 27th December to 2nd January 2023.